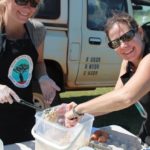 Our Paediatric Nutritionist, Sue Swanson has been out and about in Broome during the past month working with local sporting clubs to try a healthy alternative to the traditional post sport snack of ‘sausage on bread’.

First to trial ‘the fritter’ were the nippers from The Broome Surf Lifesaving Club where corn fritters were offered alongside the normal sausage sizzle. Approximately 70 corn fritters were served to parents and children who used a vote style evaluation system, consisting of a pebble which was placed in a bucket marked with a range of ‘smiley’ faces denoting ‘happy’, ‘ambivalent’ and ‘unhappy’, to allow assessment of the acceptance of corn fritters as an alternative to a ‘sausage on bread’.

Despite initial reluctance of children to try fritters, parents were appreciative of the concept and the voting revealed 40 ‘happy’ votes, 20 ‘ambivalent’ votes and 8 ‘unhappy’ votes, so overall a positive result! The fritters were costed to approximately 60 cents per piece, which is on par with the cost of the sausage on bread option.

Fritters were also cooked up for breakfast at the North West Football Carnival hosted by Broome Soccer Association on 6th and 7th September. Corn and apple fritters were offered to players as they came off the field alongside sausage, bread and beans. Feedback was very positive and other sporting clubs have now requested the recipes to try after their games.

Thanks to Broome Surf Lifesaving Club and Broome Soccer Association for their enthusiasm in trialling a healthy alternative.

If clubs offer a corn fritter instead of a sausage on bread they are providing their members with: 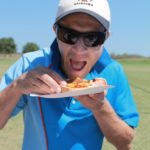 Why not encourage your local club to try them out?